When I first moved to Charlotte, I had no idea that beer influenced a large part of the culture here. So, when I saw that AIGA Charlotte was putting on an event called, Beer & Branding Showcase, I was thoroughly confused. I initially thought someone was coming to give a speech about branding and beer would be served. However, when I looked further into Beer & Branding, I realized it's an event where a designer and a local brewer partner together and use their expertise to craft an innovative design and a signature beer, while keeping the secret ingredient in mind. I was immediately intrigued and so excited about this event that it led me to sign up.

The process of creating my design was extremely gratifying because I was able to do something I’ve never done before - create a beer label. I had a few sit-downs with my brewer to discuss ideas. During the first sit-down I actually tasted the beer to better understand the product I’d be creating a design for. My brewer created a watermelon-cucumber beer with the added secret ingredient, ginger, and it was the best beer I’d ever had. I took the aftertaste the beer gave me and used it as inspiration for my design. I named this beer “Coolmelon Summer Ale.”

Dribble was the first place I went to for design inspiration. There was an array of beer labels other designers had created for projects and I was able to pull ideas to help form my own beer label. After getting my creative juices flowing, I did a little moodboarding, compiling various types of texts, icons, images, that I felt captured the essence of the beer. It was important for me to incorporate the unique green colors of a cucumber as well as the deep pink of a watermelon in the label, as I felt it would evoke a cool and peaceful mood, with a refreshing twist. I wanted the potential consumer to feel like this beer was the perfect refreshing beverage for a hot summer day just by seeing the label. I used a circular format to capture the physical shape elements of a cucumber and a watermelon for a more cohesive feel to the design. The warped text, paired with the color scheme and shape, was intended to give it a slight “hippie” feel. I felt this gave the beer an automatic relaxation vibe, perfect for summer. 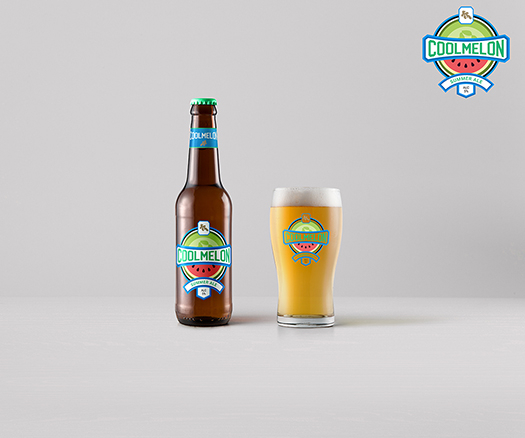 During the second sit down, I showed my brewer the design and he loved it! The colors and style I choose were highly inspired by the ingredients and I was very pleased with the execution of the design. It was really eye-opening to mock up the design on a beer bottle, because at that moment the design became a real thing for me, and I realized how my designs could be applied to a real world product.

The day of the event was so exciting. I was able to see what other designers created. It was very inspiring to see so much local talent right here in Charlotte. The best part about the event was going from table to table tasting each beer, discovering how many different variations of combinations and flavors were used, all while having a core commonality of ginger. I enjoyed looking at all the designs and seeing how each designer connected their concept to the beer itself.

I was surprised to see how passionate each brewer was about their creation, it reminded me of the same passion I have for design. Even though my brewer didn't win the contest, it was surreal to see my design displayed for people to see.

Participating in this event gave me a sense of confidence about my design work and provided me with further insight on how strong the AIGA community is here in Charlotte. I met new people who shared my same passion, discussed different ways to conceptualize a design, and learned a lot about how to brew a good beer. Beer & Branding gave me a platform to create and showcase my work and I am forever grateful for that opportunity. I definitely look forward to participating in this event again and seeing how as I continue to grow as a designer, what new ideas I’ll be able to create for next year’s competition.